Antarctica, South Georgia and the Falklands

While there are many captivating places in the world, few can compare to Antarctica, the islands of South Georgia and the Falklands for awesome beauty and remarkable wildlife. The images that greet you in these remote and unspoiled places are simply overwhelming: Icebergs as blue as a clear summer sky; jagged mountains laced with a snowy white mantle; and thousands upon thousands of penguins stretching as far as the eye can see. Next January, join us on our voyage to this incomparable part of the earth aboard the new state-of-the-art152-guest expedition cruise ship Minerva.

Sailing from Argentina’s Ushuaia, located at the southernmost tip of South America, we will retrace the sea lanes navigated by storied explorers, including Amundsen, Scott, and Shackleton. Our expedition will take place during the austral summer, when the days are long and relatively mild and the wildlife is at its peak.

We will first explore the Antarctic Peninsula, a narrow finger of land that separates the ice-chocked waters of the Weddell and Bellingshausen Seas, and surrounding islands. As Minerva sails through scenic waterways, witness a breathtaking panorama of icebergs, blue glaciers and jagged snow-capped mountains, and explore penguin rookeries, see other wildlife, and look for minke, humpback and orca whales that frequent the icy, food-rich waters of Antarctica.After stopping at Elephant Island, where the men of Sir Ernest Shackleton’s ill-fated expedition aboard the ship Endurance were stranded in 1916, we will reach South Georgia, the spectacular remote island in the South Atlantic with its glacier-clad mountains, craggy peaks, and vast numbers of king penguins as well as other penguin species, large colonies of albatross, fur seals and elephant seals. Before ending our voyage of discovery, we will spend two days in the Falkland Islands, an archipelago that harbors an amazing concentration of wildlife that boasts over 200 bird species, including several that are endemic to the islands.

We are delighted to have three scientists on this expedition: Dr. Nigella Hillgarth, former director of the Monterey Bay Aquarium, and by Dr. Dee Boersma and Dr. Sue Moore, from The Center for Ecosystem Sentinels. Their lectures and presentations will provide depth and meaning to our exploration.

Join us on this once-in-a-lifetime adventure.

Constructed in Finland and launched in December 2021, Minerva was designed specifically for polar exploration. Enjoy the luxurious amenities of this new state-of-the-art expedition cruise ship that accommodates a maximum of only 152 guests in elegant and spacious staterooms and suites. The ship’s size; limited guest capacity; superb accommodations and public spaces, facilities and services; advanced and eco-friendly technical and mechanical systems; and a complement of experienced officers and crew make Minerva the ship of choice for exploring remote parts of the world in safety and comfort. A fleet of Zodiac landing craft will bring you into intimate contact with the incredible places we will explore.

Arrive in Buenos Aires, the capital of Argentina. Transfer to the Alvear Icon Hotel. In the evening, meet fellow travelers, lecturers, and trip director at an evening cocktail reception.

After breakfast at the hotel, join our group flight to Ushuaia, the world's southernmost city, where SH Minerva will be waiting. Set sail in early evening and enjoy spectacular vistas as the ship cruises the Beagle Channel.

Attend lectures and briefings on what lies ahead and enjoy Minerva's facilities as Minerva navigates the Drake Passage. Keep a lookout for the Albatross, Cape Petrels, and whales that may accompany the ship as we make our way to the White Continent.

During these five days, we will immerse ourselves in the pristine wilderness of the South Shetland Islands and the Antarctic Peninsula, a narrow finger of land separating the ice-choked waters of the Weddell and Bellingshausen Seas. As Minerva cruises through the incredible scenery of the Lemaire and Neumayer Channels, witness a breathtaking panorama of icebergs, blue glaciers, and jagged snow-capped mountains. Aboard the ship's Zodiacs, cruise among ice floes and explore penguin rookeries. The exact nature of our daily activities will depend on ice and wind conditions, but we expect to make landings at such places as Paradise Harbor, where humpback and minke whales are often sighted offshore; Petermann Island, the habitat of Gentoo and Adelie penguins; and Deception Island, known for its volcanically-heated hot springs and for the remains of abandoned whaling huts that have been overrun by the extraordinary wildlife, including the largest colony of chinstrap penguins on the Antarctic Peninsula.

South Georgia enjoys a rich bio-diversity that has earned it the nickname "Galapagos of the Southern Ocean." Magnificent and remote, South Georgia is renowned for this abundance of wildlife, as well as for its stunning beauty and the vital role it played in the history of Antarctic exploration. It was first claimed in 1775 by Captain Cook and was a jumping off point for both Eric Larsen and Ernest Shackleton. During our visit we will explore the island, searching its grassy slopes for nesting albatross, witness the antics of stately king penguins, and visit abandoned whaling stations now overtaken by fur seals and elephant seals. In Grytviken, we visit the ruins of the once-bustling whaling station, which offers a very fine museum, and pause at the cemetery where Shackleton is buried. In Gold Harbor, set against the backdrop of the imposing Bertrab Glacier, we discover breeding grounds for both king penguins and elephant seals, and at St. Andrews Bay we encounter the largest king penguin colony in the world. As is true throughout our expedition, the exact nature and extent of daily activities will vary with the wind, ice, and weather.

Today we reach the windswept Falkland Islands, 450 miles northeast of Cape Horn in the exceptionally rich waters of the southern Atlantic. Wildlife is abundant here, including over 219 bird species and the world's largest numbers of black-browed albatross and rockhopper penguins. In Stanley, the Falklands' capital, stroll the charming streets and visit the museum with exhibits on maritime exploration, natural history, and the 1982 Falklands War.

These two islands at the northwest corner of the Falklands boast some of the most spectacular coastal scenery in the archipelago. Both are currently run as sheep farms and are very sparsely populated, so they remain a haven for wildlife of all sorts, but especially for birds. Over 200 species have been confirmed, with black-browed albatross, imperial cormorants, and the usual mix of penguins predominating.

After breakfast aboard, transfer to the airport for our group flight to Buenos Aires, where we connect to flights homeward. 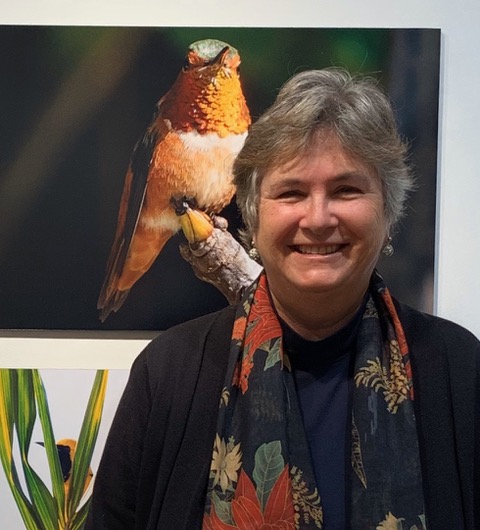 Dr. Nigella Hillgarth is a biologist who served as the Executive Director of the Birch Aquarium, the outreach arm of Scripps Institution of Oceanography, from 2002 to 2014. Among other achievements during her tenure, Dr. Hillgarth developed one of the first major exhibits on climate change in the US. Prior to her work at Birch Aquarium, she served as Executive Director of the Tracy Aviary in Salt Lake City, the largest Bird Park in the country, where she collaborated on conservation efforts for birds in the Galapagos islands, Peru and Argentina.

‍
From 2014 to 2017, Dr. Hillgarth served as President and Chief Executive Officer of the New England Aquarium, where she raised the profile of the Aquarium’s global conservation and research work by founding the Anderson Cabot Center for Ocean Life, as well as developing a vision for the future of the Aquarium and the surrounding Boston waterfront. An avid photographer of the natural world, Dr. Hillgarth was the 2019 Climate Art Fellow for the Climate Science Alliance, and worked on visualizations of ocean-atmosphere interactions and climate with the National Science Foundation Center for Aerosol Impacts on Chemistry of the Environment at Scripps Institution of Oceanography. She is now working on a threatened birds photographic project.

‍
Dr. Hillgarth received a Bachelor’s degree in Zoology from Oxford University in the UK, as well as a PhD in Evolutionary Biology. She has conducted research on behavioral ecology and evolution of birds in many parts of the world, including Europe, India, Thailand, South America, and the United States.

The rates are all-inclusive. There are no hidden costs and no additional charges such as embarkation and port charges. Other than the airfare and expenses of a personal nature, all else is included. Specifically, the rates include the following:

NOT INCLUDED: Airfare; travel insurance; expenses of a personal nature; any items not mentioned in the itinerary or the above inclusions.

If you have any questions or would like for us to contact you regarding our journeys, please leave us your name and email below.

Thank you! Your submission has been received!
Oops! Something went wrong while submitting the form.
Antarctica, South Georgia and the Falklands