Table of the Gods

“Dress your hair with fine extracts of perfume.... and while you are drinking let these tasty dishes be brought to you.”  – Athenaeus, 2nd century BC

More than 2500 years ago, the Greeks laid the foundations for the now-celebrated Mediterranean diet. The ancient Greeks considered cooking an art and a science, and they made gastronomy a subject of serious study. Amazingly, the cuisine of modern Greece traces its origins to the ancient past and draws its inspiration from it. No other country in Europe can claim such a long and uninterrupted culinary tradition. As Greeks established colonies throughout the Mediterranean, they introduced vine cultivation and wine making in the lands they settled, including Italy, France and Spain. During the Middle Ages, Greek wines were among the favorites of Europe’s royal courts.  Continuing on this long tradition, Greece today produces award-winning wines from indigenous ancient and modern varieties.

The area of concentration of this unique journey is northern Greece.

A journey into the heart of Greece's wine country

Depart from the US for Thessaloniki, Greece

Arrive in Thessaloniki, the main city of Greece's northern region of Macedonia. Upon arrival, transfer to the elegant Hotel Makedonia Palace, located near the center of the city, facing the sea. In the evening, enjoy a welcome dinner prepared, by special arrangement, by Father Epifanios, a monk at Mount Athos, Greece's ancient monastic community and one of the country's most distinguished and accomplished chefs.

Leave in the morning for Vergina, known in ancient times as Aigai. Now a UNESCO World Heritage Site, this was the royal burial place of the Macedonian kings. In 1977, Greek archaeologists discovered the sumptuous temple-like royal tombs, including that of Philip II, the father of Alexander the Great. His tomb yielded incredible treasures in gold, which we will see in the local museum. Lunch in the nearby town of Naousa. The area around Naousa is the heart of Xinomavro, the red wine grape, with a Protected Designation of Origin. After lunch, we will visit one of the pre-eminent estates of the region, Kir-Yianni, the vineyard and winery of Yiannis Boutaris. Return to Thessaloniki in the afternoon.

Vibrant and cosmopolitan Thessaloniki is the pre-eminent Byzantine city of Greece, known for its outstanding monuments dating from late antiquity and the medieval periods. In the morning, tour Thessaloniki's main monuments. Included are the Arch of Galerius, the Roman Emperor, the remains of his palace, the Roman Rotunda, now the church of Aghios Georgio, and Aghia Sofia, a church dating to the 8th century. Also, visit the superb Museum of Byzantine Culture. By special arrangement, lunch will be serviced at the American Farm School, an independent educational institution founded in 1904 by American missionary John Henry House to service the rural population of Greece. Afternoon is free for independent activities.

On the way to Amyntaio in western Macedonia, stop in Pella, the capital of ancient Macedonia at the height of its power and the birthplace of Alexander the Great. After visiting the museum with its exhibits of spectacular mosaics found at the site, continue to Amyntaio to visit the excellent Alpha Estate. Spread beautifully around a pristine lake, Alpha produces exceptionally fine wines. Lunch will be served at a lakeside restaurant. On the return to Thessaloniki, stop in Edessa, a town situated on a cliff, known for its lovely streams.

A short distance outside Thessaloniki is the admirable Gerovassiliou Estate which we will visit in the morning. Gerovassiliou is a meticulously tended vineyard and winery, in an area that has been producing wine for at least 1,500 years. Gerovassiliou is known for its high-quality wines which we will sample during our visit. Return to Thessaloniki for an afternoon at leisure. You may wish to visit the Archaeological Museum or the Jewish Museum, housed in a beautiful early 20-century house.

Leave Thessaloniki for the eastern part of Macedonia, stopping first at Biblio Chora, a fabulous vineyard and winery. After visiting this state-of-the-art winery and sampling its wines, continue to the seaside town of Kavala for lunch and ancient Philippi. Interested in the nearby gold and silver mines, Philip II took over Philippi in the mid-4th century BC and named the town after himself. In 49 AD, St. Paul spent time in Philippi. After exploring the site, continue to Drama, a prosperous town situated at the foothills of a mountain. Accommodations for the next three nights at the beautiful Hotel Hydrama.

Explore the region of Thrace, one of the least known areas in Greece. Situated on a crossroads between Greece, Bulgaria and Turkey, the landscape of Thrace is dominated by dramatic and heavily wooded mountains in the north, tapering into a plain down to the Aegean Sea. Stop first at Stavroupoli, an old village in a most impressive setting, with narrow cobbled streets and traditional architecture. Continue to Xanthi, the region's center, a market town whose old section is lined with 19th-century mansions, two of which have been turned into the Folklore and Historical Museum. Enjoy lunch at a local taverna, and then visit the Anatolikos Vineyard. Located near the coast, Anatolikos is a certified organic vineyard that cultivates traditional varieties of Thrace, and produces seven labels which we will taste during our visit.

In the morning, visit the Alistrati Cave, one of the most spectacular caves in Europe. Over two million years old, the cave features a variety of impressive formations. Continue to the Pavlidis Estate. Founded in 1998 by Christoforos Pavlidis, the Estate, in its short period of existence, is considered one of the finest wine producers of the country. Lunch will be served at a local restaurant, with time at leisure provided in Drama. Enjoy dinner al fresco at the Oenogenesis Estate whose vineyard is spread beautifully on the slopes of Mount Falakro.

In the morning, fly from Kavala to Athens. Upon arrival, transfer to the elegant Hotel King George, located on Syntagma Square, the center of the city. In the afternoon, tour the Acropolis and its celebrated monuments. Occupied since prehistoric times, the rocky plateau of the Acropolis rises dramatically out of the plain and dominates the modern city as it did in ancient times. The incomparable Parthenon and the other temples and structures built in the 5th century BC represent the highest achievement of architecture and art of the Classical period. Also, visit the Acropolis Museum which houses an outstanding collection of sculpture and other artifacts.

In the morning, tour the Agora, the heart of public life of ancient Athens. Here, Socrates conversed with his fellow citizens and St. Paul introduced Christianity to Athenians. Continue to the National Archaeological Museum, home to masterpieces from Greece's historic periods. Afternoon will be free for independent acivities. Enjoy farewell dinner at a restaurant overlooking the Acropolis.

Transfer to the airport for return flight to the USA 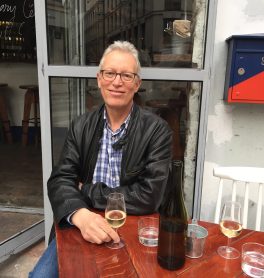 Eric Asimov is the chief wine critic of The New York Times and the author of “How to Love Wine: A Memoir and Manifesto,’’ published by William Morrow, and “Wine With Food: Pairing Notes and Recipes From The New York Times,’’ written with recipes by Florence Fabricant and published by Rizzoli. His weekly column appears in the Food section of The Times. Naturally, he is on Twitter and Instagram, too, @EricAsimov. A collection of his columns is included in “The NewYork Times Book of Wine’’ published by Sterling Epicure. Before he started writing full-time about wine in 2004, Asimov wrote primarily about restaurants and food. He created the $25 and Under restaurant reviews in 1992 and wrote them through 2004. He is a co-author of five editions of The New York Times Guide toRestaurants, and published four editions of “$25 and Under: A Guide to the BestInexpensive Restaurants in New York.’’ In 2013 he was inducted into the James Beard Foundation’s Who’s Who of Food and Beverage in America. Asimov is a graduate of Wesleyan University in Middletown, Conn., and did graduate work in American Civilization at the University of Texas at Austin. He is married to Deborah Hofmann, has two children, Jack and Peter, and lives in Manhattan.

Thank you! Your submission has been received!
Oops! Something went wrong while submitting the form.
Table of the Gods