The Origins Of The American Democratic Ideal

It is often said that we travel abroad to more fully understand ourselves upon returning home. Ancient Athens was a founding cradle of democracy, giving birth to notions of freedom and equality. Some 2,200 years later, when the United States gained its independence, its democratic system was greatly influenced by the Athenian model, and also by the writings of ancient Greek and Roman thinkers, including Homer, Plutarch, Xenophon, Aristotle, Epicurus, Cicero and Cato.

On this journey we will go back to the sources, the places that contributed so much to our country’s culture. Our exploration will appropriately begin in Athens, which Plato called “the city hall of Wisdom”. After touring ancient monuments attesting to its glorious history, we will embark on a cruise to the fabled islands and shores of the Aegean Sea aboard the private yacht-like Callisto, which accommodates only 34 guests. In Santorini, we will explore the remarkable remains of a prosperous and well-organized prehistoric city; in Crete, in addition to visiting the magnificent Bronze Age palace of Knossos, we will venture to Gortyn, where, among other remains, we will see the laws of the city, dating to 500 BC, carved on stone slabs so that every citizen could read them; we will call at the small sacred island of Delos, seat of the Delian League, which marked Athens’s transition to an imperial power; Ephesus, in Turkey, one of the world’s most glorious archaeological sites is next, followed by the beautiful and unspoiled island of Chios, home of the Adamantios Korais Library, named for the leading Greek scholar of the 18thcentury, who corresponded extensively with Thomas Jefferson. The Library, which we will visit, houses some of this correspondence. Before we disembark in Istanbul, we will explore the ruins of Troy, site of the legendary Trojan War, related by Homer in his Iliad.

We are privileged to have on this thematic journey Andrew O’Shaughnessy as our Guest Lecturer. The Vice President of Monticello, the home of Thomas Jefferson, he is the Saunders Director of the Robert H. Smith International Center for Jefferson Studies at the Thomas Jefferson Foundationand Professor of History at the University of Virginia. The author of several acclaimed books, he is an authority on Thomas Jefferson and the founding of America. Professor O’Shaughnessy’s lecture topics will explore such themes as the Origins of Modern Democracy in the Ancient World; the American Founders and the Classics; John Adams, Alex De Tocqueville, and the critique of Democracy in America; and Thomas Jefferson and Democracy. Through his lectures and discussions, Mr. O’Shaughnessy will explore with travelers how ancient classical thinking influenced the writers of the American Constitution.

Depart from the USA for Athens, Greece.

Arrive in Athens and transfer to the Hotel King George, conveniently located on Syntagma (Constitution) Square, the center of the city. In the evening, enjoy a welcome dinner at a local restaurant.

One of the world’s most venerable sites, Athens is the capital of Greece and Europe’s oldest city. Its ancient monuments are testimonials to a glorious past that gave birth to democracy and witnessed the origins of many of the arts and sciences that constitute the Western tradition. Drive in the morning to Marathon, site of the great battle fought in 490 BC between the large invading army of the Persian Empire and the much smaller force of mostly Athenian citizen-soldiers that resulted in the improbable victory of the Athenians. After exploring the site and visiting the museum, enjoy lunch at a country restaurant, and then return to Athens to tour the Agora, the civic and commercial center of ancient Athens and the living heart of its democracy.

Spend the morning at leisure. In the afternoon, tour the Acropolis and its celebrated monuments. Occupied since prehistoric times, the rocky plateau of the Acropolis rises dramatically out of the plain and dominates the modern city as it did in ancient times. The incomparable Parthenon and other temples and structures built in the 5th century BC, during the height of Athens’s democracy, represent the highest achievement of architecture and art of the Classical period. Also, view the hill of the Pnyx, where the Athenian assembly met, the Areopagus, the meeting place of the Athenian council, and visit the Acropolis Museum, which houses an outstanding collection of sculpture. Continue to the coast to board the Callisto and sail.

Be on deck this morning to admire one of the most memorable sights in the Mediterranean – the white-washed town of Santorini perched on the edge of the 1,000 foot-high palisade of Santorini's volcanic caldera. Known in classical antiquity as Thera, the island was a flourishing trading center inhabited by a prosperous and well-organized society during the Bronze Age. In the late 17th century BC, a massive volcanic eruption collapsed half of the island and buried its main town, now called Akrotiri, in a thick layer of ash and pumice, thus preserving its houses, streets and squares as they existed 3,700 years ago. Excavations have brought to light the town and precious artifacts. After exploring Akrotiri, visit the Museum of Prehistoric Thera, which houses objects from the excavation. Enjoy lunch at a restaurant ashore that provides beautiful views of the caldera, as well as time at leisure for individual activities.

Dock in the morning in Heraklion, Crete. The largest of the Greek islands, Crete is the reputed birthplace of Zeus, and home of Europe’s earliest civilization, the Minoan, which dominated the Aegean world during most of the Bronze Age, starting in 2000 BC. Drive through the island’s striking countryside to Gortyn, an important ancient city and the island’s capital during the Roman period. Gortyn’s remains include the Law Code, stone blocks attached to a public building on which the laws of the city were inscribed. The Code dates from 500 BC. In the afternoon, visit the magnificent palace of Knossos, the largest and most impressive Minoan palace in Crete. Clustered around a courtyard, the palace contains a maze of rooms, passages and stairways that probably inspired the concept of the labyrinth. More than any other palace, Knossos reveals the brilliance and refinement of the Minoan civilization. Walls decorated with frescoes illustrate life as it was 4,000 years ago. Continue to the superlative Heraklion Museum, home to the world’s finest Minoan artifacts.

Disembark in the morning in Delos, the small island that was sacred to ancient Greeks, because it was the birthplace of the divine twins Apollo and Artemis. After the defeats of the Persians in the 5th century BC, and under the leadership of Athens, Delos was the center of the Delian League, the treasure of which was used by Athens for its expansionist plans. After exploring this UNESCO World Heritage site, a vast open-air museum, sail to nearby Naxos, the lovely island that was sacred to Dionysus, the god of the grape harvest, winemaking, and ecstasy. Naxos was a major center of the prehistoric Cycladic culture, and later, a member of the Delian League. Spend time at leisure to explore quaint Chora, the island’s main town.

Arrive in the morning in Kusadasi, on Turkey’s Aegean coast. Drive to Priene, dating from the 4th century BC, and known today for the exceptional quality of its buildings that convey an excellent impression of a city from that era. Dominating the well-preserved site is the imposing Temple of Athena, a superb example of Ionic architecture. In the afternoon, tour Ephesus, one of the world’s great archaeological sites. Renowned as the center of worship of the mother-goddess Cybele, later known as Artemis, Ephesus was also the site where St. Paul preached Christianity (AD 52-54). See the stunning façade of the Library of Celsus, the Temple of Hadrian, the Theater, and other buildings. Excavations continue and archaeologists have restored the Terrace Houses, giving a glimpse of the daily lives of the Ephesians.

The reputed birthplace of Homer, the island of Chios is known for its beautiful landscapes, historic sitesand old villages. The island is also home to the Adamantios Korais Library. Korais, an 18th-century Greek scholar, corresponded extensively with Thomas Jefferson, and a good portion of the correspondence is housed in the beautiful library, which we will visit in the morning. Continue to the 11th century church of Nea Moni, one of the most important Byzantine monuments in Greece, renowned for its architecture and mosaics. In the afternoon, visit the old villages of Mesta and Pyrgi.

Sail in the morning through the narrow strait of the Dardanelles to arrive in Turkey’s port of Canakkale, which gives easy access to Troy. Excavations that began in Troy in the second half of the 19th century, and which continue to this day, have revealed nine different layers of cities superimposed in rings on a massive mound rising above the “windswept” Plain of Ilium. As Homer recounts in the Iliad, one of these cities is where the Greeks fought the Trojans. After ten years of war, the city of King Priam finally fell to Odysseus’s ruse of the Trojan Horse.

Dock in the morning in Istanbul. Disembark and transfer to the airport for the return flight home. 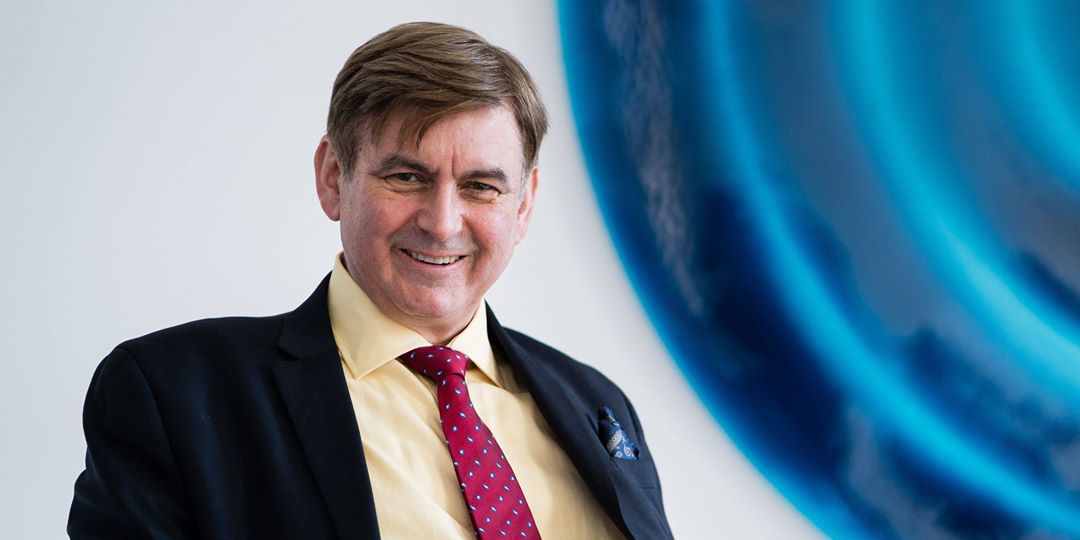 Andrew O’Shaughnessy is the Vice President of Monticello, the Saunders Director of the Robert H. Smith International Center for Jefferson Studies at the Thomas Jefferson Foundation and Professor of History at the University of Virginia. His most recent book is The Illimitable Freedom of the Human Mind: Thomas Jefferson’s Idea of a University (Charlottesville: University of Virginia Press, 2021). He has previously published The Men Who Lost America: British Leadership, the American Revolution and the Fate of the Empire (New Haven: Yale University Press, 2013), which received eight national awards including the New York Historical Society American History Book Prize, the George Washington Book Prize and The Society of Military History Book Prize. He is also the author of An Empire Divided: The American Revolution and the British Caribbean (Philadelphia: University of Pennsylvania Press, 2000) which was the alternate designate selection of the History Book Club. A Fellow of the Royal Historical Society, he is an editor of the Jeffersonian America series published by the University of Virginia Press. He received his B.A., M.A. and Ph.D. from Oriel College, Oxford University.

Outside cabins on Lower Deck with twin beds and portholes

‍Outside cabins on Lower Deck with twin beds and portholes

‍Outside cabins on Main Deck with twin beds and window

NOT INCLUDED: Airfare; travel insurance; expenses of a personal nature; gratuities to shipboard personnel; any items not mentioned in the Program Inclusions.

In Search Of Homer

Voyage To The Lands Of Gods & Heroes

Exploring The Classical World Of The Aegean

If you have any question or would like for us to contact you regarding any journeys, please leave us your name and email below

Thank you! Your submission has been received!
Oops! Something went wrong while submitting the form.
The Origins Of The American Democratic Ideal